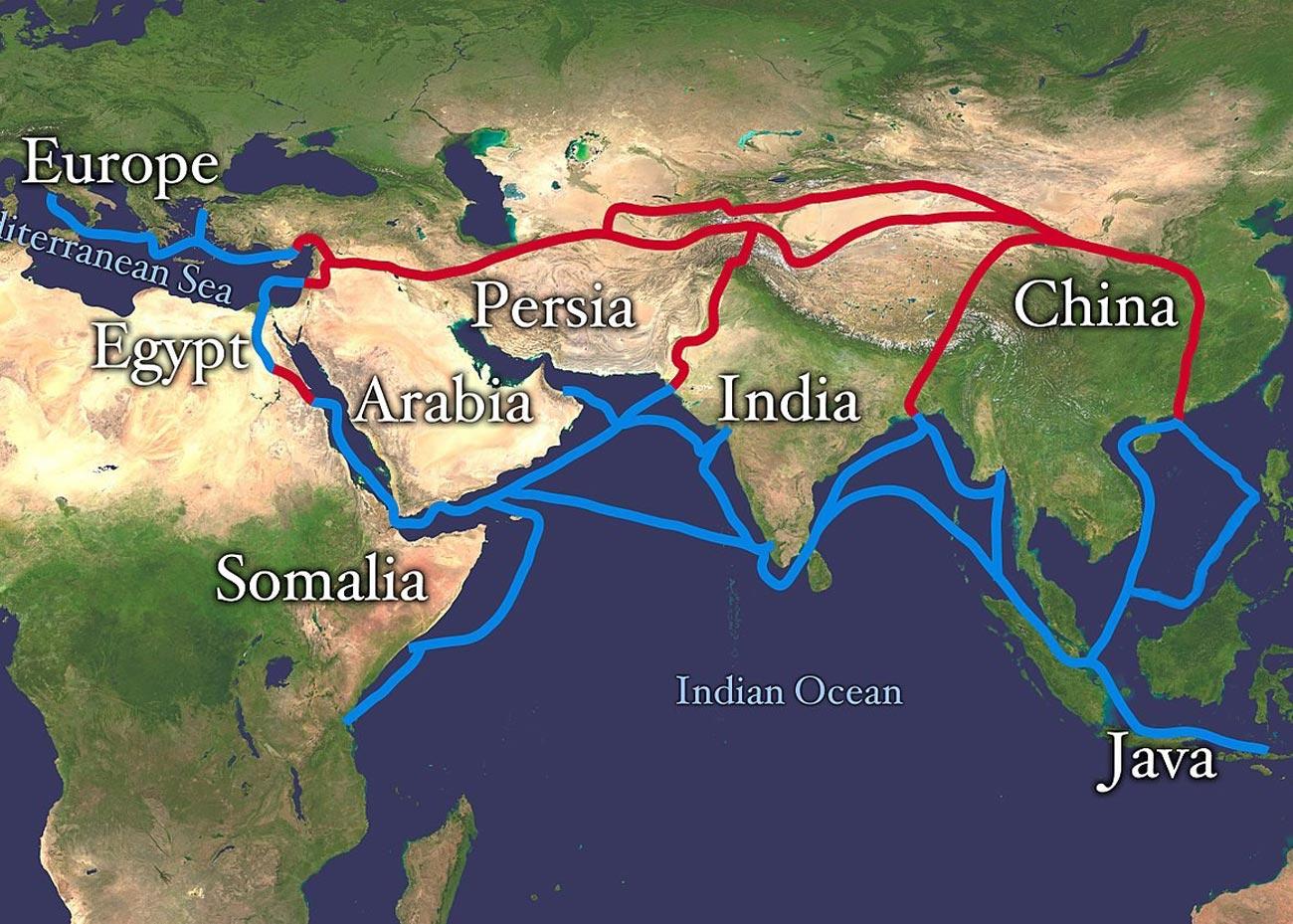 Silk Road: the journey between history and modernity

The origins, itinerary and story of the iconic trade route

Few phenomena — except, perhaps, for the religious ones — evoke such strong emotions and cause heated debate like the Silk Road does, despite the fact its story began more than 2,000 years ago. Up until today it preserves its power and meaning, and in the course of the last months its name was often brought up.

The name “Silk Road” was first coined by a German geographer Ferdinand von Richthofen (1883-1905). In the introduction to his “Diaries from China” (Tagebucher aus China, 1877) Richthofen used the term Seidenstraße – which is German for Silk road – to describe from the historic, geographic, social and economic point of view all those caravan ways and trade routes over rivers and seas that connected Oriental Asia (in the first place China), Middle East and the Mediterranean. 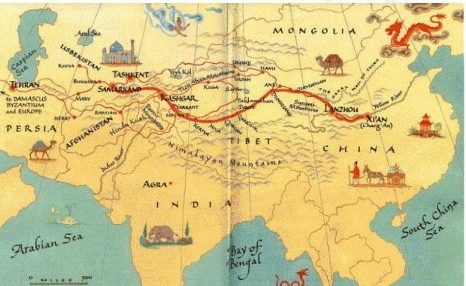 There were at least 5 main trade routes, to which more secondary roads were added over time. The core route started in the ancient Chinese capitals Xi’an and Luoyang, in the Yellow River basin.

It crossed the fertile Gansu corridor, reaching western China in the Xinjiang region and then continued to Central Asia and eventually Europe.

Precious products travelling between Europe and the East

Precious stones and spices, perfumes and medicines, cattle and porcelain, jade and bronze, lacquer objects and mirrors arrived in Europe all the way from China and the Middle and Far East. Millet, rice, tea came the same way, as did great inventions that profoundly marked Western history — such as paper and gunpowder.

Silk came in such large quantities that the whole network of routes adopted its name. Silk products — light, easy to transport and highly valued goods, precious by definition — have long been a secret that the Chinese civilization kept to itself.

Silk was paid worth its weight in gold, especially in the Roman period. At a certain point the Roman Senate was obliged to issue specific edicts to prevent its use in order to avoid financial problems. [approfondisci] 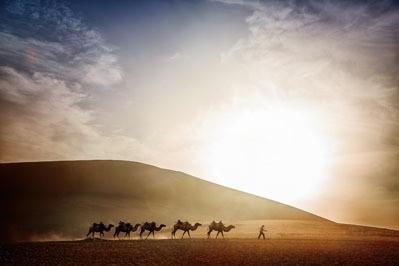 It is believed that the Silk Road started more than 2,000 years ago, when the Chinese economy and society which had been carefully protected and thus unknown to the West, was “opened” at the behest of Emperor Wu of the Han dynasty who ruled between 141 and 87 BC.

Trade with the neighboring markets was initiated, followed by the opening of trade routes with Central Asia, which gradually went all the way to Europe.

Further on, the appointment of Zhang Qian as the ambassador of the Empire in Central Asia effectively contributed to the success of this historic period that lasted until 1368 AD. Then, with the fall of the Mongol Yuan dynasty (1279–1368), the communication routes became no longer safe and were gradually replaced by faster maritime trade

Some milestones on the Silk Road history: 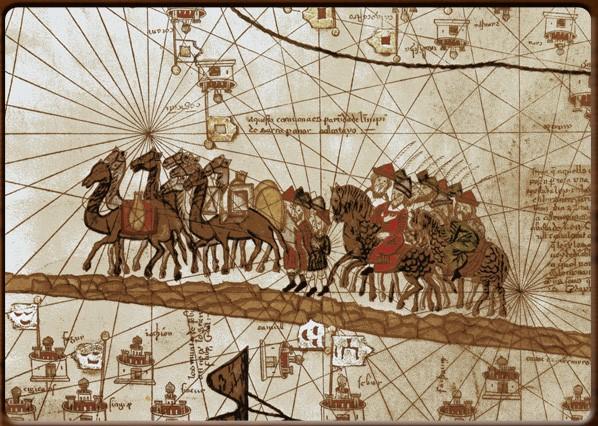 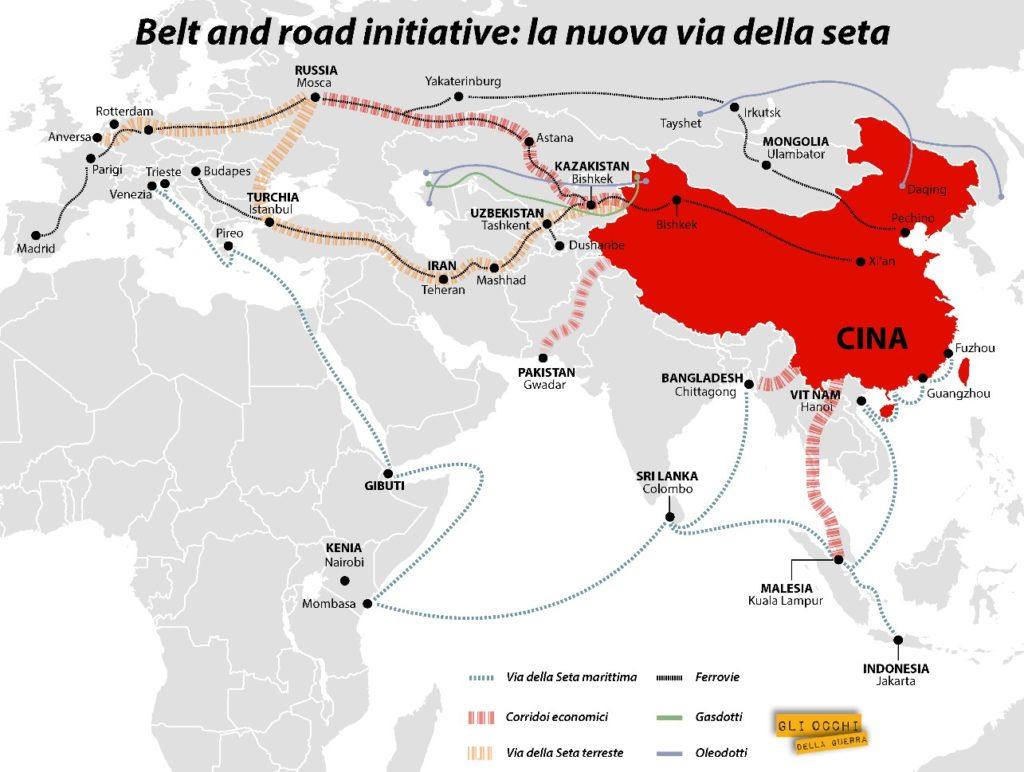 The new Silk Road does not refer to just a single project but rather to a complex system, which Beijing intends to use to relaunch its infrastructure network and reestablish trade connections with Europe and Asia.

The “Belt and Road Initiative” (BRI), also known as “One Belt, One Road” (OBOR), was announced by the Chinese president Xi Jinping in 2013 and is promoted by the minister Li Keqiang. It is often referred to “The new Silk Road“, in order to bring to mind the times of dynamic trade when silk represented the core of that great expansion. BRI has the goal to implement the idea which during the XIX congress of the Chinese Communist Party was defined as follows: “The Chinese dream is a dream about history, the present and the future.”

A total of 65 countries are involved in the BRI project. Some numbers about these countries:

$900 billion investment is expected for two macroprojects and additional directions

An ambitious and extraordinary project which is and will be all the more the subject of continuous redefinitions as well as of economic and social political pressures and contrasts on the part of other world economic powers (Europe/USA/Russia/India), due to its structural, economic and social dimensions and implications.